A while ago, the Swedish Jögge Sundqvist has published his long awaited book Karvsnitt about chip carving and other decorational techniques. To date, it is only available in Swedish, but translations are in the making. I have read the book in Swedish and will give my review below, so you can decide if you are interested in the translated version of this book. 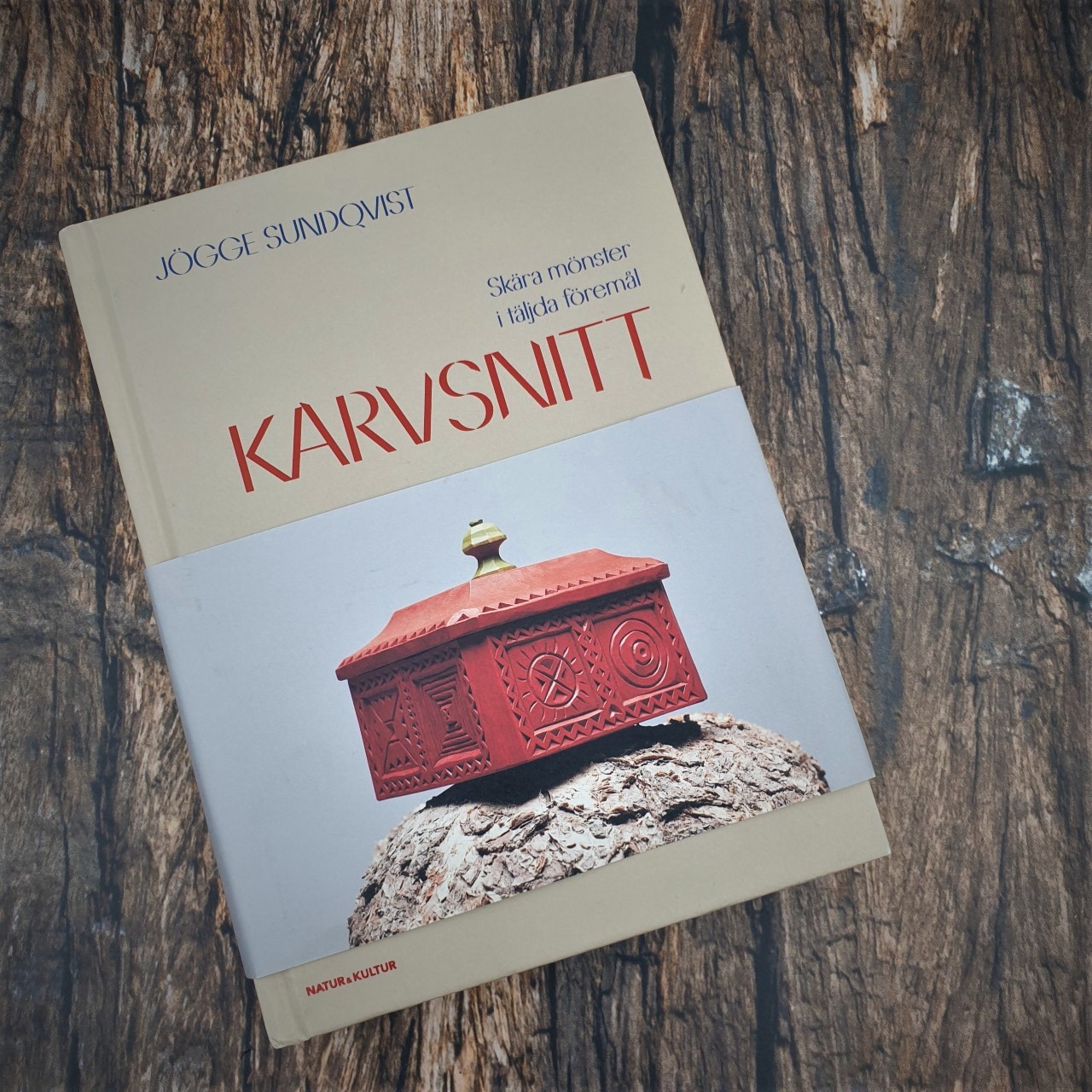 Jögge Sundqvist is the son of the legendary Wille Sundqvist and he is also a world renowned professional traditional woodworker. From is father he learned to work with the axe and knife from the age of 4 years old. Skills that would become the basis of his professional career. First parttime (from 1985) and in 1999 he stopped as a professional rock musician and became a full-time craftsman. Jögge is also known under his alter ego “Surolle” (which means as much as a sour old man). He works exclusively with hand tools and finds his inspiration in the self-sufficient “farmers” crafts (sloyd) and the folk art from the 17th and 18th centuries.

Jögge is known for his beautiful, colorful images both inside and out in nature, furniture and utensils such as spoons. His work has been purchased by the Nordiska Museet, Statens Konstråd and Swedavia Umeå Airport and can often be seen in exhibitions and is rewarded with grands and prices. Jögge has participated in various programs on TV, films and radio programs, gives lectures and shows and has written various articles and books about ‘sloyd’. From his capacity as Morakniv Ambassador he recorded various instructional videos about knife grips. And during the Corona pandemic he also gave live workshops at a distance (Undervis På Distance). In other words online classes. In short, a very impressive CV arising from a lifetime background in sloyd and media.

His previous books were Tälj För Kök Och Trädgård (carving for kitchen and garden) and Slöjda I trä / sloyd in wood. His newest book is now Karvsnitt, Skära Mönster I Täljda Föremål (decorative carving/chipcarving, carving patterns in handmade utensils). This book is currently only for sale in Swedish and I have bought and read that version to write this review.

Extensive attention is paid to tools and their maintenance, the material, the decoration techniques and the associated knife grips. He deals with the three types of decorative methods that have traditionally been applied to utensils. Painting, kolrosing, chipcarving (including some work with gauges). In addition to the carving techniques themselves, attention is paid to drawing and composing patterns.

This focus on decorating utensils with traditional techniques, combined with attention to the meaning and purpose of the symbols used in the past, distinguishes the book from other books on decorative wood carving. You are guaranteed to look at decorated wooden boxes and objects in the museum with completely different eyes.

For those who want to get started right away, there are a number of projects described in the book, in which you can apply the different techniques yourself. The book closes with a short chapter on artistry in craft. In short: it is a very complete book. Not only about the decoration techniques, but also about everything around it.

Throughout the book there are beautiful photos with examples of carvings on old utensils. Interspersed with designs by Jögge inspired on those old objects, carved in his free and colorful style. Many drawings show what is being explained in the text. For example, the position of the hand with for a specific knife grip and the direction of the carving movement. Or the movement the elbow makes while carving round shapes.

Striking, for example, is the colorful way in which Jögge illustrates the carving of the triangles used in chip carving. Instead of the usual black-and-white drawings with dotted lines, he opts for colors that indicate the square cuts and the oblique cuts. Shadows show the shape and deepest point of the pattern. Very clear for those who want to try it themselves.

All this together results in a colorful and cheerful book in which the process is clearly explained step by step, supplemented with clear and well-arranged examples and projects to get started right away.

The projects are a combination of classics such as a sheath for a knife, the spoon rack, a shrink pot and a book cover, in which the song book was taken to church. But there are also ‘more modern’ projects such as a mobile phone stand. There are also timeless objects such as plates with tile wisdoms and a jewelry box. You will also find a back scraper and a hair comb. Kitchen utensils are also included: a spaghetti fork and decorating a (serving) spoon. There is also a project to make a bread or potato skewer and of course there is also the cutting board. Other projects include pimping your carving knife and making key rings.

My thoughts about this book

Karvsnitt is a playful, colourful, versatile and comprehensive book about decorating wooden utensils with traditional techniques such as chipcarving, gouging, kolrosing and painting with self-made oil paints. Many other old and traditional techniques are also included in the projects. Think of making a shrink pot, boxes and sheaths. It is a complete book that not only examines the technique itself, but also the historical background and possible meaning of the symbolism involved.

This book connects you with the past and puts you in the present with beautiful projects and a vision about artistry in craft. Karvsnitt is currently only available in Swedish but I have received confirmation from Jögge Sundqvist that both German and English translations are coming, so keep your eyes peeled for those!

You will find on the website of Jögge Sundqvist: www.surolle.se